For Guzik, her path to becoming a Red Cross volunteer began just after Hurricane Katrina. In the wake of the storm, Red Cross volunteers were desperately needed to help those impacted by one of the United States’ worst disasters.

“I heard a public service announcement that your local Red Cross was training, so I went down to the Camarillo office and got some training and you were on a plane two days later,” Guzik said.

Following her work on the front lines of Katrina, Guzik served as the Preparedness Health
and Safety Services Nurse Consultant and in this role helped engage nurses as volunteer instructors. Additionally she is a Red Cross facilitator with the State of California Service Team.

“Eleanor exhibited leadership excellence both in developing the Care Assistance program and in leading disaster health services in multiple disaster relief operations,” said Red Crosser Mary Casey-Lockyer, “She is a true example of a volunteer who supports the red mission through leadership excellence.”

Guzik also uses her previous disaster experience as an instructor and helps to develop training that will help volunteers be better prepared to help those in need after a natural disaster strikes.

“Eleanor took the initiative to develop a training for volunteers to be care assistants in our shelters for people with functional and access needs [Disaster Health Services] was able to expand on her initial effort to develop a standardized program that will be trained to perform basic tasks and help residents with basic needs while staying in our shelters. Without Eleanor’s effort, this new service would not be available as a standard offering,” Valerie Cole, Disaster Health Services and Mental Health Manager said.

As a volunteer, Guzik has gone above and beyond to help those affected by disasters. In Fall of 2015 wildfires ripped through California’s Lake, Calaveras and Amador Counties destroying more than 1,7000 homes and displacing thousands of families. 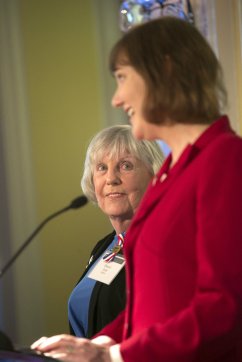 In those fires were five people who lost more than their home, but their ability to hear after losing their hearing aids. That is when Guzik stepped up to help those five strangers. Guzik had recalled meeting Marilyn Reilly, a volunteer in the Desert to the Sea Region, who has worked in the hearing aid business.

After speaking with Guzik, Reilly sought help from Sonus Hearing Healthcare Professionals. Persistence from the pair paid off when Sonus, with support from Starkey Hearing Foundation, announced that the five victims would receive hearing aids for free.

At an event in February,  four of the five fire victims were fitted for new hearing aids. Combined efforts provided a total of more than $30,000 worth of hearing aids.

Most recently, Guzik has worked to with Red Cross Government Relations to change restrictive Automated External Defibrillator (AED) legislation. Guzik was instrumental in providing real word examples of why the laws around AEDs needed to be updated in California. In addition, she provided research and input during the legislative process.

On August 28, 2014 California Senator Jerry Hill’s Bill to expand the availability of life-saving AEDs unanimously passed the Senate and was signed by Governor Jerry Brown on September 9, 2015.

For Guzik, one of the biggest positives of volunteering with the Red Cross is meeting other people with the same passion for helping others.

“One of the privileges of volunteering with the Red Cross is the volunteers, the other people you get to work with. They’re exceptional people, I am grateful that I got that opportunity,” Guzik said.

This passion for working as a team and building relationships with fellow volunteers is why Guzik has been honored with the American Red Cross Ann Magnussen award.

“The more I do, the more I love it. It just fills your heart, the work does. And I probably put in as many hours or more hours as I did when I got paid,” Guzik said.